We took an enquiry from the Marketing Manager at Forces Cars Direct, a Lincoln based company that specialises in car sales to members of the Armed Forces across the whole country. They had just committed to a 6 month radio sponsorship on Lincs FM starting in January 2021, and were looking for alternative options to run alongside this.

We discussed the benefits of both bus and digital billboard advertising and how both would work really well alongside the radio campaign. The client decided they only wanted to go with billboards.

After checking the availability of billboards in Lincoln, we found that this was limited until March. However, there were two new digital 48 sheet billboards (D48’s) located on Dixon Street just round the corner from the Forces Cars Direct premises on Tritton Road and we knew we could get some excellent prices for these.

The client loved the idea of the D48 and booked a 3 month campaign to run from January until March. We also booked the first available dates on a standard paper billboard on Oxford St for 4 weeks to start in early March.

The client decided they wanted to promote another part of their business which they call Motor Source Group. This does exactly the same as Forces Cars Direct, but extends the target market to now also include all emergency services and NHS personnel.

After seeing the digital billboard advertising in situ, the Managing Director called and asked about the possibility of extending the standard billboard campaign. We looked at current availability and after a discussion with the contact at the media owner, we managed to secure the exact board the MD wanted for a 6 month period. This was to run from the 5th April for a further 26 weeks.

Both campaigns are currently running and hopefully the digital board will also be extended to work alongside the standard board and radio sponsorship.

For details of billboard advertising in Lincoln and across Lincolnshire, contact CG Advertising Ltd TODAY. 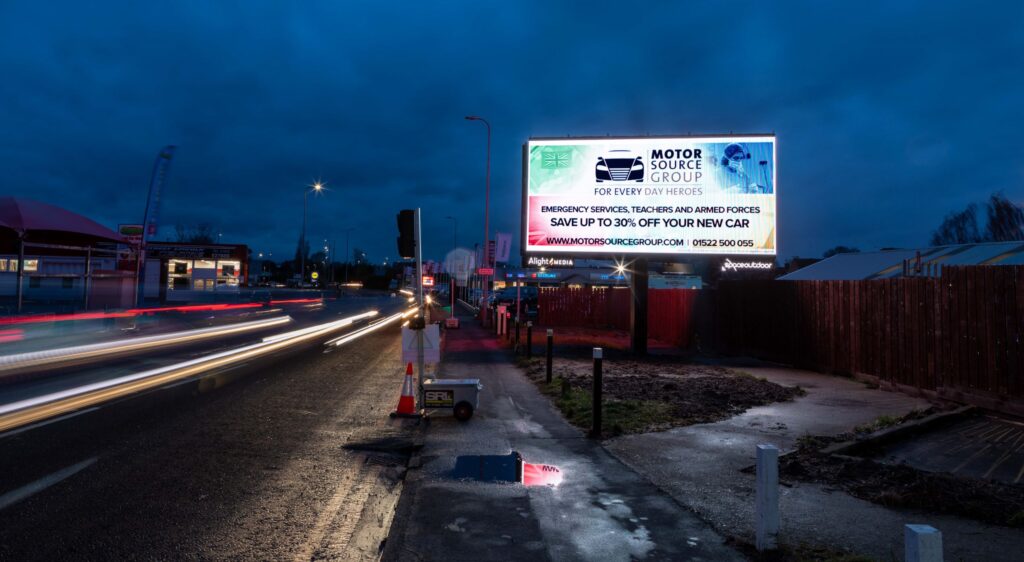