Outdoor Advertising in Leeds – First Direct Bank were the UK’s first telephone bank. They started in 1989 and their headquarters are on Wakefield Road in Leeds, with a second site at Hamilton in Lanarkshire.

They promote themselves as the bank ‘that never sleeps’ as they are open 24 hours a day, 7 days a week and 365 days of the year.

As such, recruiting the right staff is vitally important to them.

These campaigns have included several different forms of Out Of Home formats, but have mainly been traditional billboards and bus rear advertising.

Each campaign provides coverage across the main post-codes they know traditionally attract potential employees. For Leeds this has mainly been around the M62 corridor, in and around the City centre and into towns such as Wakefield. 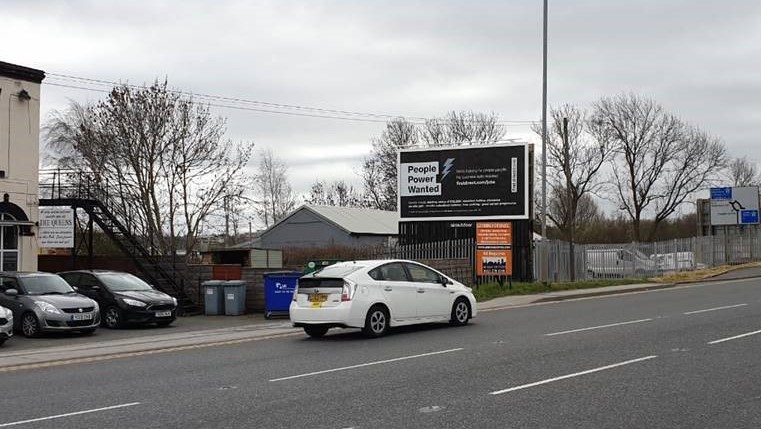 Throughout our time handling this account, there has been one site in Leeds that has been on their radar.

We have never been able to secure it at a time that fitted their requirements. This site was just outside their Headquarters on the A639 Wakefield Road. It was in an ideal location, only yards away from the main entrance. It had the opportunity to advertise on both sides of the billboard. This would allow them to reach commuters coming in and out of Leeds every day. Perfect to promote themselves as a new career option to disgruntled commuters!

This site was originally handled by JC Decaux, but was taken over by AirOutdoor, a local Leeds based billboard specialist.

We had a good relationship with AirOutdoor and as such, they were aware of our work with First Direct.

When they secured the site, we were told of the situation and offered first refusal to book a campaign. Their plan was to upgrade the whole site and then sell it long-term.

We approached First Direct about this opportunity and they happily booked both sides of the site for an initial 6 month period. This new upgraded site went live in March 2019.

The client will have two different creative designs during this 6 month period, with each design will be every 6 to 8 weeks. This will ensure the poster always look in great condition throughout the whole campaign.

For booking details of Outdoor Advertising in Leeds and across the whole country, contact CG Advertising Ltd TODAY