Lincolnshire Talent Academy is led by United Lincolnshire Hospitals NHS Trust. They bring together health and care organisations from across the County to help recruitment and skills development for their current and future workforce.

The Academy works with students, schools, colleges and universities and other agencies such as the Department of Work and Pensions. Their remit is to provide services for individuals from the age of 14.

A main part of their recruitment is the annual Health and Care Careers Event held at the Engine Shed, based at the campus of the University of Lincoln.

We were approached to work alongside Lincolnshire Talent Academy to help promote the event. They wanted to reach both potential candidates and the wider general public. After a detailed discussion, we decided to proceed with a bus advertising campaign out of the Lincoln depot. The reason for using buses, was visibility. We knew that that by using bus advertisements, their message would hit their target market quickly and easily. The campaign was designed to work alongside the other activity with schools and colleges.

We booked a 4 week campaign consisting of a mix of Lower Rear and Streetliner adverts to run from the end of October. We timed this so the buses were seen in the weeks running upto the event. They acted as a reminder to those who were already aware of the event, and also a prompt to those who weren’t.

This campaign was seen as a great success.

For booking details of bus and billboard advertising in Lincoln and across Greater Lincolnshire, contact CG Advertising Ltd TODAY 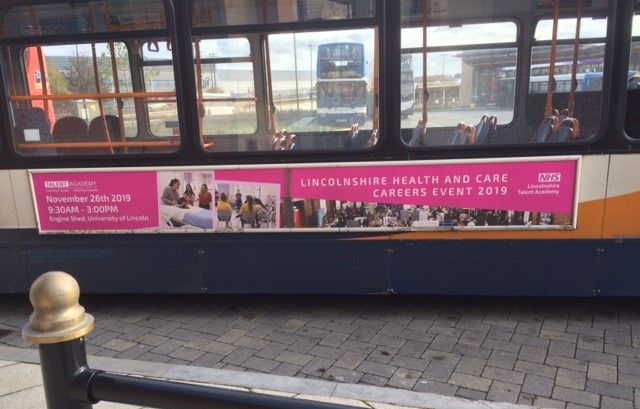