In August 2021, we were approached by Claire Parkinson, one of the Network Performance Manager’s for Calor Gas in the UK. She wanted to run a bus campaign for three of her suppliers as we entered the Autumn/Winter period.

The suppliers were Mariner Gas in Scunthorpe, AKM Ltd in Bridlington and Compton Gas and Garden Centre Ltd in Luton. We looked at the availability of buses out of the local depot for each supplier and booked the following campaigns. 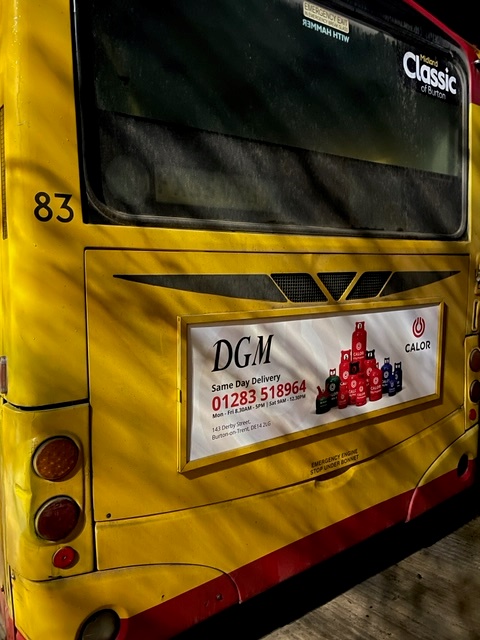 All three suppliers were very happy with their campaigns as they were given visibility in their local areas with a relevant message.

Later on Claire approached us again asking about bus advertising opportunities for four more of her suppliers to advertise across November, December and January. The suppliers were DGM Coventry, Burton on Trent and Wellingborough aswell as Lumbs Ltd in Wakefield. Again we looked at availability and other opportunities as the bus wasn’t an option in certain areas. We booked the following campaigns.

DGM Coventry took 1 x D48 (digital billboard) for 8 weeks from 29th November. The client also had a bit of luck, as the digital supplier has just launched a brand new screen in the City and put their campaign on that FOC aswell.

Again, each supplier was happy with their campaign. Claire has expressed delight on behalf of everyone and is keen to look at opportunities again throughout 2022 for more of her suppliers.

For each campaign, we were assisted by Simon Smallwood of Footprints Design Agency in Lincoln who designed all the artwork.