Andrews Car Centre are a family-run used car business who have been in Lincoln since 1929.

Based on a 1-acre purpose built site on Dixon Close, facing the junction of Tritton Road and Dixon Street they are a familiar sight to the people of Lincoln.  From here, they sell quality used cars aswell as having a service and repairs section.

Over the years they have used most types of advertising. However, after following a bus around the City, the Sales Manager realised they had never tried bus advertising in Lincoln. Interested in finding out more, we were approached to look at a campaign for them. This was to run across the Spring and early Summer of 2020. 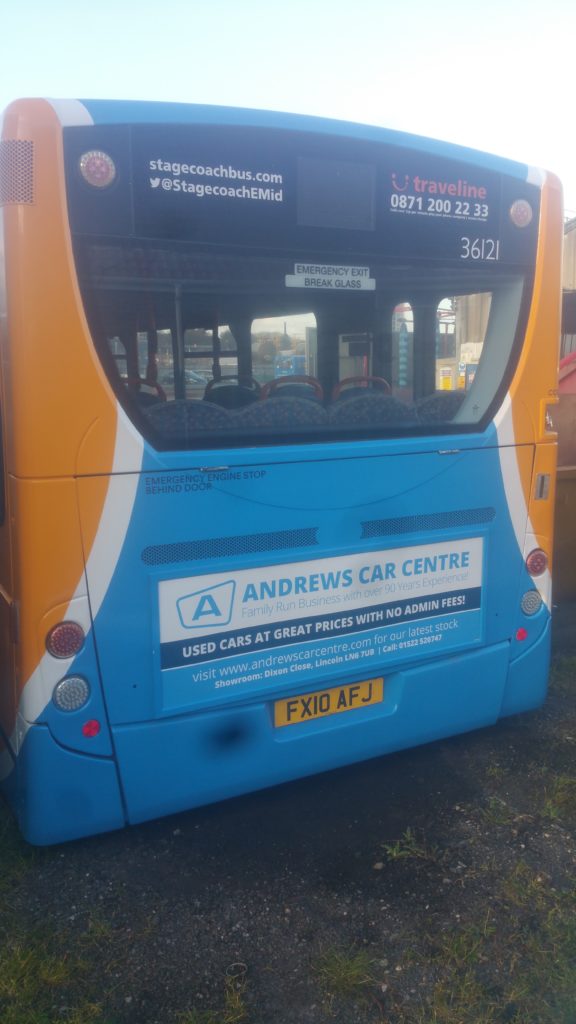 We met up and discussed the different options available when it comes to bus advertising. This included lower rears and streetliners advertising. With them definitively wanting to target drivers, the decision was made to run a lower rears bus advertising campaign out of the Lincoln bus depot.  One of the requirements was to get the campaign to run over a longer period of time, but still to fit within a reasonable budget. With this brief we decided to run two, four week campaigns with a four week gap between them. The theory we used was based around the good availability during this period. This would mean there was a good chance there would be over-runs from the first campaign over the period they were not officially live up to the start of the second campaign.

The client wanted to run with a simple but clear sales message. This was ‘used cars at great prices with no admin fees’. As part of the overall package, Simon from Footprints Design Agency was brought in to deliver this creative. Footprints Design Agency are a local Lincoln-based agency who we work with on a regular basis. By working as a Team, it makes the whole process simple for the client.

The first campaign was due to go live week commencing 30th March with the second due to run from w/c 25th May. However, the coronavirus pandemic and subsequent lockdown, caused a few issues. After we were given assurances that the buses were still going to be running, the first campaign eventually went live on 7th April. We were also told that no other campaign would be started in the short-term. This meant that the Andrews Car Centre lower rears were going to run for much longer than the original 4 week booking! As such, the second campaign was suspended to run at a later date in the Summer.

This current situation was something no-one could predict but sometimes clients benefit in unexpected ways!

For details of Lower Rears bus advertising in Lincoln and across Lincolnshire, contact CG Advertising Ltd TODAY. Go to www.cgadvertising.co.uk

For details of Andrews Car Centre go to www.andrewscarcentre.com

For details of Footprints Design Agency go to www.footprintsdesignagency.co.uk