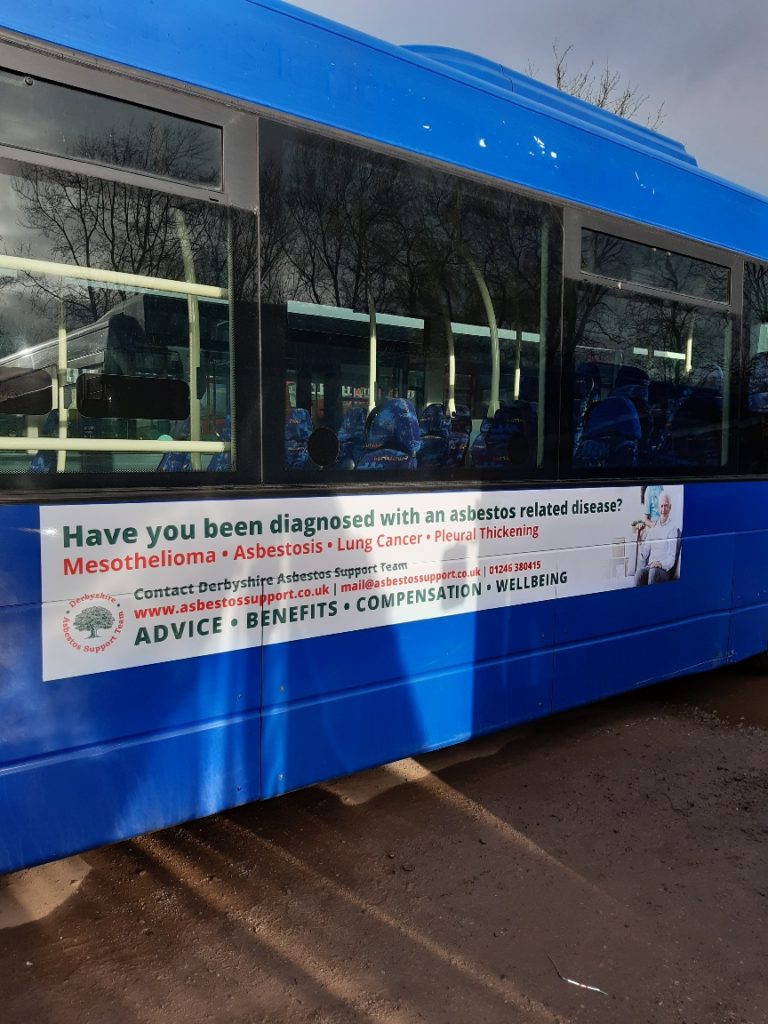 The Derbyshire Asbestos Support Team (DAST) are a registered charity. They help people who have suffered ill health, injury or become disabled from work with asbestos.
The Derbyshire branch of the charity is based in Chesterfield. They approached us to help them raise awareness of their services. They wanted this particular campaign to reach people in and around Derby.

The brief was to highlight the support offered in terms of advice, benefits, compensation, general wellbeing and support. The campaign was booked because the Charity needed to reach both sufferers and the families of sufferers who have illnesses caused by asbestos. These include Mesothelioma, Asbestosis, Lung Cancer and Pleural Thickening.

We looked at several options that would help achieve their desired aim. After discussing everything with the client, we decided to go with a bus streetliner advertising campaign. The reason for this was the visibility the streetliners would give both in the City and the surrounding towns and villages on the bus route.

We booked an 8 week campaign because we wanted the message to have some longevity in the area. The campaign consisted of 8 street liners on the Littles of Derby bus fleet and ran from early March 2020.

Littles of Derby are a family run business firmly established in the City. Their distinctive fleet consist of a range of small buses either in white, blue or green. Whilst doing our research, we found out Littles of Derby had recently started taking advertising on their bus fleet. This fact played a part on our decision to use this medium. It would mean that DAST would be one of the first advertisers they took and as such would become much more memorable.

Using a simple, but informative message on a white background, we placed all the adverts on the blue and green buses. This made the DAST message stand out as the buses went around Derby.

For details of Derbyshire Asbestos Support Team go to www.asbestossupport.co.uk

For details on bus advertising across the East Midlands contact https://cgadvertising.co.uk